This is the second blog based on exec-appointments.com’s recent research into the executive recruitment market.  Having set the scene last time, it’s now worth investigating some of our results in more detail.

The first and perhaps least surprising result was that our sample of over 3,600 exec-appointments’ users are, in general, far more optimistic about the job market than their equivalents were in 2010 and 2012, when we last conducted this research. Over 80% of the sample believe there are more senior-level jobs available and 63%-70% think the overall economic climate is much less risky and more conducive to changing jobs. Not only that, but the majority also believe it’s easier to find a job nowadays (see chart below). 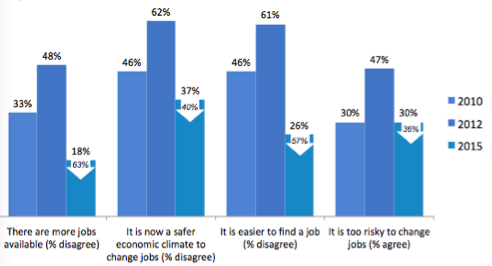 What’s really interesting though is when we break down these figures by different age groups/levels of seniority.  Bearing in mind that exec-appointments is used by thousands of aspiring senior managers and directors, there is a clear majority of younger people who believe that it’s still too risky to change jobs.  Perhaps conventional wisdom might lead us to suspect that the young are less risk-averse than the old, but it’s certainly not the case here. 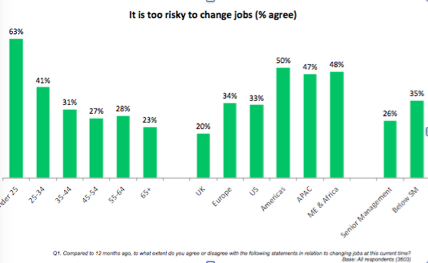 That said, when we then looked at the key sectors, it’s clear that all groups are more likely to change jobs than a few years ago, as shown on the next chart, which considers the likelihood of a career move in the next six months and the next two years. 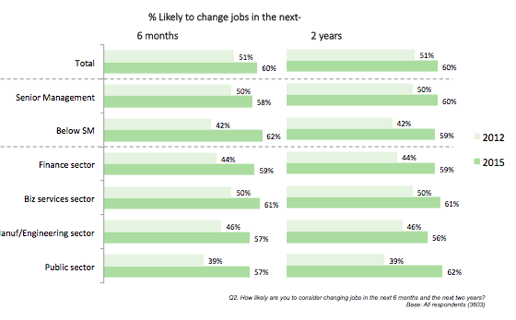 As with the previous chart, it’s clear that senior management are less averse/more likely to make a move, while interestingly, and unsurprisingly, the group with the single biggest increase in its propensity to change jobs is the public sector.

In a later blog, we’ll look at some more of our results. There is a lot more detail available in our research which can help recruitment consultancies, in-house recruiters and others as they consider the best way ahead. Please do feel free to get in touch to discuss our findings and how they might affect your business.