This is the penultimate part of our continuing series about FT Career’s recent research into the job market for executives.  Conducted amongst a robust sample of over 3,600 users of the exec-appointments.com site, it provides some valuable insights into management/director/C-suite level views about the job market.

This week, we’re looking at how our respondents look for a job.  We were not surprised to see that recruitment consultants are the number one choice.  At exec level there is a (generally correct) notion that you need to be on the radar of the ‘better class’ of recruitment consultant.  Peer recommendation/word of mouth are then the next two most important ‘sources’ of a new job.  What we find particularly interesting is that the next ranked source is ‘company websites’, especially as these are considered less likely to be used for a respondent’s next job search.  In days gone by, the idea that candidates would trawl themselves around all the companies they might be interested in was not practical.  Today, with the internet, it’s much easier, but still a bit of a bind, which is partly why job-boards – with many good jobs collected in one place - are still highly rated, with over half of the survey having used them (bear in mind these are exec jobseekers, not traditionally regarded as job-board users) and more people intending to use them in the future than any other source except the rec-cons and peer recommendation/word of mouth. 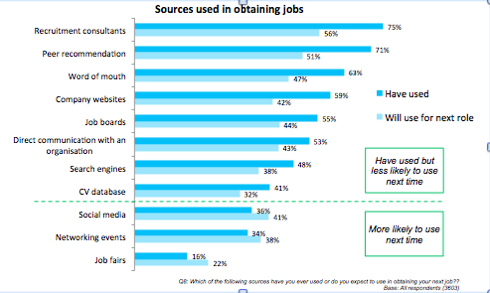 In addition, there are the ‘ubiquitous’ social media, which, other than job fairs/networking events, are the only source that are more likely to be used the next time an exec is job hunting.

What was slightly surprising was the numbers who would use CV databases coming in so low in this chart. Given that recruitment consultancies trawl these sources daily for potential gems, we think there is a good case to be made for registering your CV there: if you’re good, you’ll be found very quickly! This is borne out by the next chart, where we investigated how the use of three key sources – job-boards, social media and CV databases – has changed from 2010 to 2012 to 2015.  Again stressing that this is an exec market we’re looking at here, what’s really significant is the way that job-boards actually increased in importance quite substantially between 2010 and 2012/2015. In contrast, social media use, while increasing, has not grown at the same rate.  Is this because at senior levels there is a perception that social media are not suitable for ‘our’ kind of jobs?   More research is needed here – and if anyone has some they’d share then we’d be very grateful! 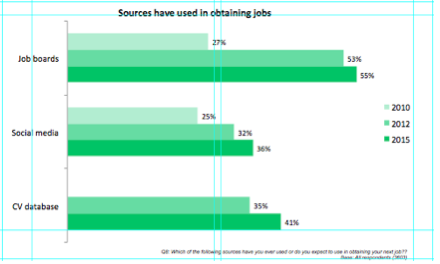 Finally for this week’s blog, we looked at the changing way in which people access these sources/media.  Despite the large increases in smartphone/tablet use beween 2012 and 2015, desktop usage is virtually (in the proper sense of the word) ubiquitous. In fact, the percentage using desktop/laptops for job-searching actually increased, from 95% to 97% between 2012 and 2015.  The numbers using mobile also increased in this period, from 27% to 40%, but there is a decrease in mobile use for job hunting when we look at age (again perhaps unsurprising) whereas (again unsurprisingly) age is also a factor when it comes to print sources of jobs, but this time with the older candidate being more likely to use printed media.  All of which suggests that, contrary to rumours of its demise, print still has a part to play, especially as part of a cross-platform approach combining online/job-board and social. 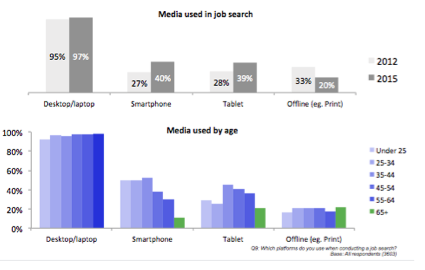 Next week, in the final part of this series, I’ll look at the big question of the day – what part do social media play in recruitment for exec/C-suite level candidates.